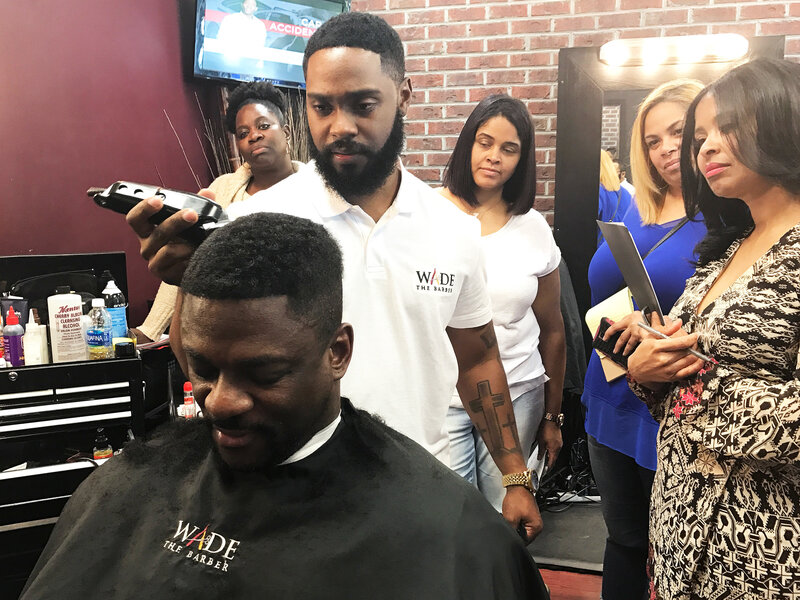 Robert Jenkins was only 21 when he started balding. It was a condition he'd expected given that his dad had been bald for as long as he could remember. What Jenkins did not expect, however, is that he'd have to deal with hair loss at such a young age.

He wasn't prepared for it.

"I had a lot of low self-esteem, I started to get depressed," Jenkins, now 28, says. "I wouldn't go to events. I would stay in the house because I was just embarrassed."

About two years ago, Jenkins's wife, Jayniece came across the Instagram page Wade the Barber and saw the work Wade Menendez was doing to help balding men sport a full and gorgeous head of hair.

"She told me to reach out to him. So, I reached out to him," Jenkins says.

Luckily for Jenkins, Menendez's barber salon The W Hair Loft was located less than 20 minutes' drive from his Odenton, Md., home. He booked an appointment and Jenkins got himself a "man weave."

"The results were amazing," Jenkins says. "I think I was shocked because I hadn't seen myself with so much hair for so long. I really didn't know how to take it."

He was anxious about how his wife would react, but when she saw it she was blown away.

"She absolutely loved it," he says.

Jenkins has since had the man weave installed four times.

"This might seem a little bit much or dramatic, but I was honestly just grateful to God that we were able to find somebody that can bring that confidence back. Because I did not think that this would be possible at all." Jenkins says. "I thought that my hair was just gone forever, that I would never be attractive ... This was extremely life changing for me."

Robert Jenkins, 28, is balding at the top and crown of his head and has had the man weave installed four times. This is his before and after with barber Wade Menendez.

Fashion trends are becoming more unisex and less gender specific — like, for example, the romphim. Weaves, which for decades have been associated with women, especially black women, are now being deemed by many hairstylists and barbers across the country as the "game changer" for balding men.

Man weaves, more formally referred to as cranial prosthesis, hair replacement units or hair systems, are a nonsurgical procedure to help men who've lost their hair — be it through just balding or thinning, alopecia or cancer treatments — "regain" hair.

Man weaves are designed for most hair types including Caucasian, Latino and African-American/black, and have been growing in popularity over the past two to five years. In most cases, man weaves are 100 percent human hair, although some are blends with synthetic hair. Don't think of them as fake hair, think alternative hair.

Not only have man weaves been providing a cover for balding men but among African-American men, the trend has been injecting even more cash into the already booming black hair care industry. 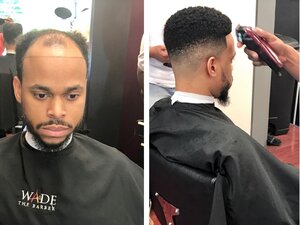 Robert Jenkins before and after barber Wade Menendez installed his hair unit, aka man weave.

According to Mintel, which compiles data on the beauty industry, the black hair care category is expanding with new brand and product entrants to the market, which is causing expenditure increases. Black consumers were estimated to have spent about $2.56 billion on hair care products in 2016.

The company also notes that these figures are missing specific data on weaves and extensions but "if all of those things were to be taken into consideration. ... expenditures could reach a whopping half-trillion dollars."

What it costs to get a man weave

A single installation of a man weave, including special custom made hair units, can cost from $275 to $800, so it's safe to say hair suppliers, hair stylists and barbers such as Wade Menendez are being kept busy.

Menendez, 34, has been a barber since 2004 and began installing man weaves about two years ago. He says that when he first started and for much of 2016, he'd spend about $1,500 a month purchasing man weaves, doing just a few clients weekly. Now, he says he spends $16,000 to $18,000 monthly because of his increasing number of clients. He says he dedicates his Tuesdays and most nights solely to man weaves.

"It's been really great," Menendez says. "At one point, it was like in three months I made $130,000 just people coming in, flying in from everywhere. It's been crazy."

When asked, Menendez wouldn't reveal his financial information but barbers in other cities say these figures are realistic if one has a full roster of man weave clients.

Menendez says he has a budding clientele that flies into Maryland from various states, a client who travels almost monthly from St. Lucia and just recently, he got a new client from London.

Such is the phenomena, that on a recent spring day about a dozen hairstylists and barbers — men and women — had traveled from cities such as Atlanta, Detroit, New York, Philadelphia, and Jackson, Miss., for a class at Menendez's barbershop in Glen Burnie, Md., where they would learn the secrets of this relatively new trade. 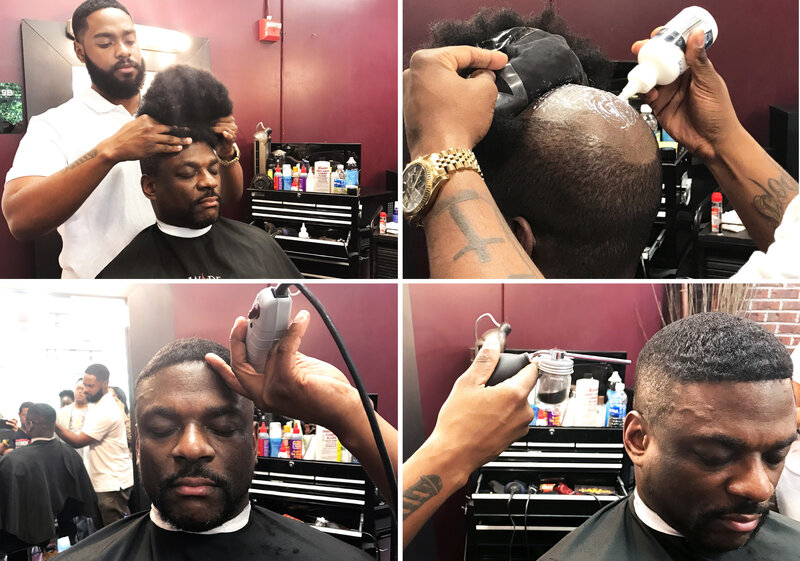 Barber Wade Menendez of The W Hair Loft in Maryland goes through the steps of installing a hair replacement unit , or man weave, on client Cliff Holcomb.

This is the 10th class that Menendez has taught on installing man weaves. Today's class is from 11 a.m. to 3 p.m. During this session, Menendez will teach two techniques, one to install the weaves on men who have very little or thinning hair at the top of their heads and the other, for men who are totally bald in the crown area. He insists that some of what he instructs not in any way be recorded for public showing. After all, participants are paying $650 each to take this class.

Menendez starts the class by displaying one of the much-talked about man weaves. It's black and resembles an Afro wig. The hair is actually affixed to breathable lace just like many of the weaves worn by women. Menendez says he sources these hair units from overseas, mostly China, but he also has a few U.S. companies that supply them. He's currently working to come up with his own line.

How to man weave

Each man weave — whichever technique — takes Menendez 90 minutes to two hours to install. For the technique he's allowing the class to photograph, a full hair unit will be attached to the client's head using an adhesive. Today's first client/model is Cliff Holcomb, an early 40s man who is balding at the top of his pate and keeps his hair low at the sides and back.

Menendez first cleans Holcomb's scalp and then uses a marker to draw along the front of his head to mark what will be the hairline for the man weave. Next, Menendez applies an anti-itch treatment. Then, he lays adhesive all over the bald area to firmly secure the weave. Next, he uses a hand-held blow dryer to make sure the hair quickly bonds with the adhesive.

The weave is then cut, trimmed and shaped to complement Holcomb's head and own natural hair. To ensure that his hairline is full and sharp, Menendez uses an atomizer to emit additional hair fibers. He then sprays on products for hold and sheen.

"It feels great, I love it," Holcomb says. He plans to keep it on for the next three months. During that time, Menendez advises not to wash it or get his own natural hair wet as this could remove the adhesive or otherwise ruffle the coiffed do. Should he wish to have it cleaned, Holcomb can return to Menendez, who'll remove it, wash it and put it back on for $150.

"Do a du-rag, give it a soft or light brush and wear a shower cap when you bathe," Menendez advises. 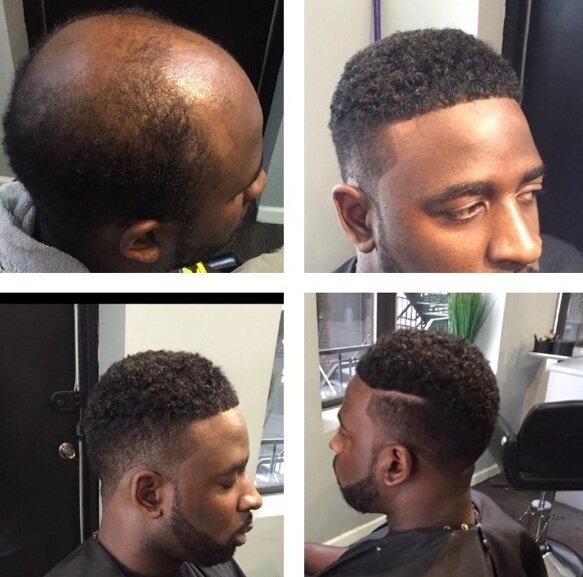 "After this class, I'm so confident," says student Angel Johnson, 44, who flew in from Atlanta. "I got all the information that I needed to go ahead and pursue this. I plan to do my first client this weekend."

Way ahead of this class is New York City–based barber stylist John Cotton, who took the man weave course with Menendez last spring. Cotton, who works at the upscale Leona Wilson-owned LW Salon in midtown Manhattan, says his non-weave clientele includes the likes of Calvin Klein, Maxwell, Tracy Morgan, Fox's Empire's Jussie Smollett and Saturday Night Live alum Jay Pharoah. Cotton has been creating a buzz around the Big Apple for transforming the lives of men in their 30s and 40s with his expert installation of man weaves. He says he does all hair types and about half a dozen a week.

"When they get their hair done, some of them have even cried," Cotton, 35, says. "It boosts their ego from two to 10. All of a sudden, they want to go socialize."

Robert Jenkins' wife, Jayniece, can relate to this.

The barbers say the one side effect of man weaves is an occasional itchy scalp. Menendez says he advises his clients, when possible, to first consult with a dermatologist or doctor and their insurance company before getting a man weave.

In addition to man weaves, Menendez is also installing complementary beards for men who may have a challenge growing and grooming their own. These beards will cost a client a cool $700.

But the real game changer at present is man weaves.

Menendez says when he first started trying to learn the technique, he was rebuffed by barbers who wanted to monopolize the market, so this inspires him to continue teaching and sharing "the man weave love." He says he's also reached out to cancer support groups and other community organizations whose members may require his service.

"When you try to hold on to something, you limit yourself to God blessing you," he says. "I live a blessed life and I'm going to continue to do so because I help to bless those [people]."

The Robert Jenkinses of this world — now with a full head of hair — may tip their hats to that.