Did You Know Serge Ibaka once begged for food outside this restaurant?

The How Hungry are You Show Host, Serge Ibaka once begged for food outside this restaurant. He returned to eat there with the Raptors NBA championship trophy

Serge Ibaka, who has almost 200,000 subscribers on his Youtube channel for his How Hungry Are You?food show, is used to serving unforgettable, exotic meals to his guests.

But one recent dinner will be memorable for a deeply personal reason.

Ibaka, 29, brought the NBA championship trophy to the Republic of the Congo over the weekend.

The Raptors centre tweeted that 15 years ago, he used to beg for food outside a restaurant. He returned to the same restaurant to eat a full meal along with his dinner companion — the Larry O'Brien trophy.

"Sometimes life is like a movie and this script is written by God only... #anythingispossible," Ibaka tweeted Monday. 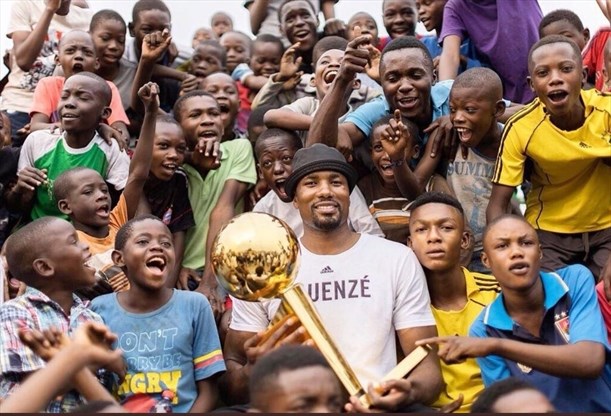 Raptors centre Serge Ibaka brought the NBA championship trophy to the Republic of the Congo over the weekend to show off the Larry O’Brien to admiring kids. - @sergeibaka ,Twitter

The video on Ibaka's Twitter account shows him eating a meal, with the trophy sitting on the bar beside him, surrounded by admirers and a film crew.

Players around the NBA applauded him, including his teammates as well as Houston Rockets superstar James Harden. Ibaka, who was born in Brazzaville, spent the weekend showing the trophy to kids.

"Showing the new Congolese generations the success of winning the NBA Championship would mean nothing if I don't inspire them to dream big and understand that anything is possible.