Andy Ruiz Jr sprung one of the biggest shocks in heavyweight championship history on Saturday night when he spoiled Anthony Joshua’s US debut with a seventh-round technical knockout at Madison Square Garden.

The unheralded 29-year-old from southern California, a replacement opponent dialled in on five weeks’ notice who went off as a 11-1 underdog, came off the floor in the third round to drop Joshua twice before the end of the frame, then sent the undefeated champion crashing to the canvas for a third and fourth time in the seventh round before referee Mike Griffin put a stop to the proceedings at the 1:27 mark. 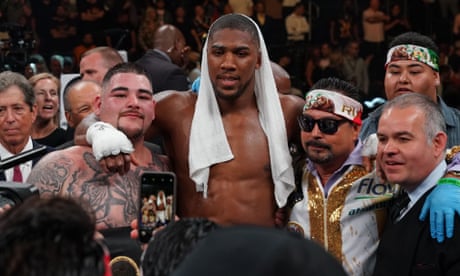 This was no fluke. No lucky one-punch knockout that can be explained away by a silver-tongued promoter. Joshua was outboxed, out-toughed and beaten up on a night that turned boxing’s bellwether weight class on its ear.

“I just feel so good, man,” said an elated Ruiz, who captured Joshua’s WBA, WBO and IBF belts in a stunner that ranks alongside Buster Douglas v Mike Tysonand James Braddock v Max Baer among the most seismic in the division’s centuries-spanning annals. “This is what I have been dreaming about. This is what I have been working hard for. I can’t believe I just made my dreams come true.”

Ruiz (33-1, 22 KOs), who was only even in a position for the life-changing upset because Joshua’s original opponent, Brooklyn’s Jarrell Miller, failed three tests for different performance-enhancing drugs shortly after the match-up was announced, became the first fighter of Mexican descent to win a heavyweight title in the most dramatic fashion imaginable.

“It’s because of the Mexican warrior I am,” said Ruiz, an Imperial Valley native and resident who spent time growing up in the border town of Mexicali and represented Mexico at the 2012 Olympic trials. “I have that Mexican blood in me. Talking about the Mexican fighting style, I just proved it.”

Joshua’s physical advantages in height (four inches) and reach (eight) appeared even more ominous under the glare of the Garden lights as the chiseled 6ft 6in, 247lb champion spent the opening round fighting off the back foot while the challenger moved forward in pursuit. The 2012 Olympic gold medalist, who’s emerged as one of boxing’s biggest superstars during a run of sold-out stadium shows in the UK, continued to measure distance into the second, scoring in occasional spots as Ruiz struggled to negotiate his way around the jab.

Advertisement
The widely preordained outcome appeared imminent in the third when Joshua sent the Ruiz’s doughy 6ft 2in, 268lb frame to the deck with a left hook to the temple early in the round. “That was my first time getting dropped on the floor,” the challenger said. “It just made me stronger. It just made me want it more. I just had to knock him down back.”

Ruiz comfortably beat the count, refused to clinch when Joshua closed in for the finish, then connected with a right hand over the top amid a firefight in the center of the ring that sent the champion to the floor against the run of play.

Joshua (22-1, 21 KOs) made it to his feet but Ruiz resumed the chase around the ring, battering the champion backward toward his own corner with a series of uncontested punches. Then near the end of the third, Ruiz connected with a heat-seeking right that knocked Joshua down and partially through the ropes, but the champion willed himself upright on sheer instinct and was saved by the bell.

The wounded Briton, suddenly unable to manage with the smaller man’s hand speed, was still reeling when the bell sounded to start the fourth. Ruiz, curiously, backed off rather than resume the pell-mell onslaught that might have finished the task. Each man had tasted the other’s power and both appeared wary as they kept their distance, allowing Joshua the precious time to rediscover his footing and escape immediate danger. The familiar geography of the encounter pressed on into the fifth as Ruiz stalked Joshua, who landed counters and pawing jabs in a slow retreat which the granite-chinned challenger walked through like raindrops.

But Ruiz came on strong at the end of the sixth with a series of chopping right hands before Joshua went down for a third time under a flurry of punches early in the seventh. The champion made it to his feet but Ruiz got the best of an exchange once more with a series of clubbing blows to floor his opponent again. Griffin’s decision to wave it off, no longer convinced Joshua could defend himself as he sought to reset himself in a neutral corner, ignited pandemonium among the announced sell-out crowd of 20,201, many of whom flew in from Britain to watch Joshua’s first outing on American soil.

Joshua, 29, suggested the stoppage was premature in the aftermath, but stopped short of criticizing the referee.

“I want to fight,” said Joshua, who connected on 47 of 176 shots (27%) according to CompuBox’s punch statistics, compared to 56 of 206 (27%) for Ruiz. “I don’t do [the referee’s] job. I am never one of those fighters to disrespect a referee like he should have done this or he should have done that. He called it off when he thought I couldn’t fight. It’s a shame. But I don’t want anyone to drown in their sorrows. It’s the long game, not the short game.”

Ruiz’s trainer, Manny Robles, said that his fighter executed their strategy to perfection.

“We had a great game plan: to stay low, not fight tall and work behind the jab,” Robles said. “Hit the chest, hit the body. I told him to either fight inside or stay outside. I did not want him to fight at mid-range and put himself in front of the big punches.”

The extraordinary result effectively torpedoed the much-anticipated summit meeting between Joshua and Deontay Wilder, who’s held the WBC’s version of the heavyweight championship since 2015. That fight was until Saturday night the biggest that could be made in the sport today, but instead becomes a slain golden goose representing a cautionary tale for the industry on the perils of letting superfights marinate too long.

“He wasn’t a true champion,” Wilder tweeted. “His whole career was consisted of lies, contradictions and gifts. Facts and now we know who was running from who!!!!”

Advertisement
Afterward Eddie Hearn, who promotes Joshua, said his fighter would exercise the immediate rematch clause in the fight contract.

“AJ got sloppy,” said Hearn during an in-ring interview over a cascade of boos that rang down from the mezzanine. “It was a beautiful combination in the third round. He was in total control of the fight but he got sloppy and never recovered. Listen, tonight was [Ruiz’s] night but AJ will come back 100% and we will make the rematch in the UK in November or December. But this night now belongs to Andy Ruiz.”

He added: “AJ has the heart of a lion and will come back stronger. Now at least we know the opponent for the end of the year in the UK. Absolutely we will enact the immediate rematch. He will be devastated when it sinks in. It makes the fall fight a must win.”

Joshua, to his credit, was upbeat in defeat while affirming he wanted a second crack at Ruiz.

“It just wasn’t my night,” he said. “I just have to turn it around a few notches and bring it back my way. I don’t want people to drown in their sorrows. This will show I have the power and the strength.”

Love Is A Verb

Adjustable downlighting, while in the background, can create the right ambience for decor, even as it's changed up.  ...
Read More
Back to BLOG