A Gemstone is a message in a bottle

Around 1920, Justo Daza, an experienced mine worker, and Fritz Klein, a mining engineer, were scrambling over the steep mountainside terraces of Chivor, a legendary emerald site in northeast Colombia. They were breaking rocks apart with long iron poles and explosives packed into drill holes. They were hunting for new emerald veins and not finding any.

Let’s move on, Mr. Klein said. This area is dead.

They upped the dose of explosives and blasted open a gaping hole that revealed promising glints of a mineral vein. Mr. Klein thrust his arm into the hole and began rummaging around. He fished out bits of quartz, feldspar and apatite — a phosphate mineral like that found in bones and teeth.

He probed deeper, until finally his hand closed around something big, dense, faceted and thrilling. Without even looking, Mr. Klein knew he’d struck green.

The prospectors had unearthed what would come to be called the Patricia Emerald: a dazzling 12-sided crystal roughly the size of a soup can, with a weight of 632 carats — more than a quarter of a pound — and a verdant color so pure and vivid you’d swear the stone was photosynthesizing.

Mr. Klein sold the find for tens of thousands of dollars, while Mr. Daza, predictably enough, “was given ten dollars and a mule,” said Terri Ottaway, museum curator at the Gemological Institute of America.

Yet the public arguably got the best deal of all: the stone was later donated to the American Museum of Natural History in New York. Today, the Patricia remains one of the largest uncut emeralds in the world, and will be a featured star when the overhaul of the museum’s gem and mineral halls is finished in 2019.

In its raw, columnar beauty, the Patricia encapsulates an often overlooked feature of gemstones, especially the ones we deem “precious” — diamonds, rubies, sapphires and emeralds. We may covet the stones for personal adornment and status flashing; we may imbue them with romance, exoticism, the titillation of the Hollywood jewel heist.

But their real power lies in what they reveal about the dynamo that forged them: Planet Earth.

For scientists, a gemstone is a message in a bottle. Except the message is the bottle, a glittering clue to the extreme physical, chemical and tectonic forces at work deep underground.

Moreover, many of the qualities that helped loft the Big Four to prominence in the first place — their exceptional hardness, the depth and brilliance of their coloring, their rarity — are also key to the jewels’ scientific value.

Precious gems are born of strife, of shotgun marriages between hostile chemical elements, and they’re tough enough to survive cataclysms that obliterate everything around them.

“Earth is an incredible, giant chemical laboratory, and it’s a dirty place to grow crystals,” said Jeffrey Post, curator of the Smithsonian’s National Gem and Mineral Collection. But those impurities grant gems their color and character “and give us vital information about the crystal structures themselves.”

The rules of gem science are not cast in stone. Researchers lately have been astonished to discover that some of the world’s largest and most valuable diamonds, which can sell for hundreds of millions of dollars, originated 250 miles or more below the surface, twice the depths previously estimated for Earth’s diamond nurseries.

Some diamonds turn out to be surprisingly youthful, a billion years old rather than the average diamond’s two billion to three billion years of age. Other researchers have linked ruby creation to collisions between continental landmasses and propose that the red jewels be called “plate tectonic gemstones.”

A team at the University of British Columbia analyzed newly discovered sapphire deposits in Canada’s Nunavut territory and concluded the stones there were generated by a novel three-part geochemical “recipe” unlike any described for sapphire formation elsewhere in the world.

You start with limestone sediments containing just the right mineral impurities — nepheline is a must! — and you squeeze and heat the rocky mass to 800 degrees Celsius (1472 degrees Fahrenheit). You add fluid and allow to cool. Finally, just when the growing mineral assemblage shows signs of instability, you inject another shot of fluid and lock the crystal into place. Total cooking time: about 1.75 billion years.

“If one step is left out,” said Philippe Belley, a geologist at the University of British Columbia, “you don’t get sapphires.”

In the past, geologists often dismissed gemstones as baubles and gem science as oxymoronic. “Gems were considered crass commercial materials and beneath the dignity of an academic,” said George Harlow, curator of earth and planetary sciences at the A.M.N.H.

More recently, geologists have seen the refracted light. “My colleagues know that a gem course done as an introductory part of an undergraduate education is a really good hook,” Dr. Harlow said. “When you can show how gems form, or the properties they have, it takes a lot of chemistry and physics to understand that.”

Dr. Post calls it stealth science. “It’s a great way to get people in the door,” he said. “If you put up a sign that says geology, nobody comes. But if you say, ‘This way to the Hope Diamond,’ then everybody wants to know more.”

Dr. Harlow suggested that precious gems gained their reputation in part by their association with gold. As insoluble stones, the gems ended up concentrated at the bottom of stream beds, often in the vicinity of similarly insoluble gold. Long prized for its ductility, beauty and resistance to oxidation, gold was considered the property of rulers and kings, so why not the glittering stones found beside it?

The word diamond stems from the Greek terms for “indestructible” and “that which cannot be tamed,” Dr. Harlow said, “and those attributed metaphysical properties made the ruler seem even more important.”

Diamonds are not indestructible, but they are the hardest substances known, given the top score of 10 on the Mohs scale of hardness — that is, resistance to scratching. Behind a diamond’s untameability is its three-dimensional structure, a repeating crystalline lattice of carbon atoms, each one strongly bonded to four neighbors atop, below and to either side.

(In graphite, by contrast, carbon atoms are bonded together only in two-dimensional sheets, which will flake apart with the simple act of putting pencil to paper.)

Persuading large numbers of carbon atoms to lock limbs in all directions requires Stygian whips of high heat and pressure, as until recently could only be found underground. In theory, the earth’s mantle, which is thought to hold about 90 percent of the planet’s carbon supply, is practically glittering with diamonds at various stages of formation.

Getting those jewels to the surface in bling-worthy condition is another matter. Diamonds must be shot up from below quickly — say, through a volcanic eruption — or they’ll end up as so much coal in your stocking. Researchers have discovered diamonds that had blundered crustward slowly enough for their carbon bonds to expand, leaving a stone with the shape of a diamond but the consistency of graphite.

Gareth Davies, a professor of geology at Vrije Universiteit Amsterdam, and his colleagues have recapitulated the reversion process in the laboratory. “Yes, we get diamonds and turn them to graphite for research,” he said. “And my wife wonders why I’m such an idiot.” 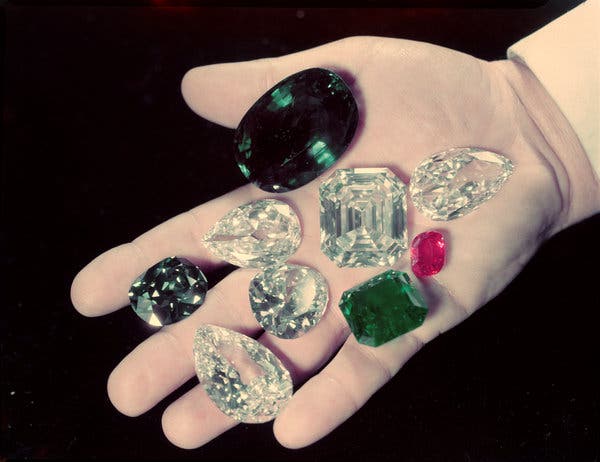 Researchers can also fabricate diamonds in the laboratory, although the results are more often destined for industry than Tiffany. Nor can scientists create anything remotely as celestial as the Hope Diamond, the world’s largest deep-blue diamond, with a back story to match.

The diamond was discovered in India, sold to King Louis XIV of France in 1668, stolen during the French Revolution, reappeared 50 years later in the collection of the Dutch banker Henry Philip Hope — hence its name — sold by Hope’s bankrupted heir and then passed from hand to sometimes unfortunate hand, picking up an aura en route of being “cursed.”

After the jeweler Harry Winston donated the diamond to the Smithsonian Institution in 1958, blithely sending the massive jewel from New York to Washington through the mail, the diamond’s fame exploded. When Jackie Kennedy, then the First Lady, arranged a one-month loan of the diamond to the Louvre in Paris, Washington’s National Gallery of Art got Leonardo’s “Mona Lisa” in return.

Researchers have since plied the 45-carat diamond with every noninvasive tool in their arsenal, seeking to understand the precise distribution of boron atoms that lend the Hope its steely blue tint and why the diamond will glow, or phosphoresce, a spectral shade of blood orange when exposed to ultraviolet light. Dr. Post suspects the phosphorescence is the result of interactions between boron and nitrogen impurities in the diamond’s near-flawless carbon frame.

Coloration mechanics figure more prominently still in the genesis of colored gemstones. After all, sapphires and rubies are built of the same basic mineral, corundum, a crystallized collaboration of aluminum and oxygen that would be transparent and colorless if not for some artful chemical doping.

With a Mohs hardness score just a point shy of diamond’s, corundum becomes a red ruby through the timely addition of chromium atoms. Recent research suggests chromium is shoved up to the crust from Earth’s mantle when continental landmasses bang together.

A sapphire is a corundum crystal of any color but red, although many people consider a true sapphire to be blue. In that case, the blue results from electrons bouncing back and forth between near-homeopathic doses of iron and titanium atoms sprinkled throughout the crystal.

Emerald is the softest of the precious stones, with a Mohs score between 7 and 8, and at its finest it’s a piece of fossilized swamp. Its mineral base, beryl, is mostly aluminum and silicon, with a critical infusion of beryllium, a light, rare and extremely toxic element.

“If you’re thinking of making your own emeralds, don’t,” said Dr. Ottaway. Emeralds form during mountain building, as shale and limestone rocks are uplifted and compressed.

“It’s a giant squeegee effect, moving hot solutions around,” Dr. Ottaway explained. Salt dissolves in the hot sludge, turning it to brine, and the brine gets trapped in pockets that then act like wetlands, absorbing organic matter and toxic metals, including beryllium, which is then incorporated into growing crystals of aluminum silicate.

THE EFFECTS OF HOLISTIC SPACES AND SUSTAINABILITY ON MENTAL HEALTH

THE EFFECTS OF HOLISTIC SPACES AND SUSTAINABILITY ON MENTAL HEALTH Sustainability and holistic design ...
Read More
Back to BLOG